Don’t be fooled by imitations, there is only one Chef Jack Lee. Call him what you want, he answers to Captain Jack or even Kangaroo Jack. His name aside, one thing remains the same; Taste, consistency and innovation in the kitchen. We spent the day with Chef Jack where we experienced a taste of the finer things in life; traditional dishes with an Escoffier twist as interpreted thru the eyes of Mad Jack.

We entered the inner sanctum of a beautiful Beverly Hills estate that is also the private art gallery called the DeVorzon Gallery. The walls were filled with beautiful works of art. As we went through the art filled rooms and corridors we finally set foot into the center of this home of creativity. There it was the hub, the hearth known as the kitchen. It was fitting that the Culinary artist Chef Jack Lee was in his art studio creating excerpts from some of his different culinary portfolios. Unlike many chefs, Jack Lee creates food as an artist creates a portfolio or body of work. He gets his inspiration from the world around him and then begins the process of creating a body of work around a specific theme much like many well known artists before him. The inspiration that created Monet’s Garden series or Picasso’s portraits of women. Weegee’s Naked City and Warhol’s Series of Marilyn Monroe and then there’s Jack Lee’s Portfolio of food inspired by life events. He calls his portfolios “Tasting Collections”.

Chef Jack Lee used food to tell a story, to represent how his clients feel and to personify who they are through his experience of

them. He takes these experiences and translates them onto the plate. A few years ago he went through jaw surgery where he lost his sense of taste. It took him a year and a half to recover his sense of taste and retrain his palate. During his recovery, he came up with the idea of his 6th tasting collection called “My True Colors” where he used food and colors to describe his thoughts and feelings through his toughest period after his surgery and his journey back to the culinary world.

It was just such an inspiration that led him to create the $100 eggroll.  He was inspired by the opulence and abundance that surrounded him. It was an homage to the relaunch of his new concept after his jaw surgery. He debuted it at a celebrity fundraiser in Brentwood.

He wanted to add some “bling-bling” to this modern delicacy that is a staple at Chinese restaurants throughout America.” By using the most expensive seasonal ingredients available to he successfully made the ultimate eggroll. He sourced Maine lobster, seasonal French truffles, the best caviar, and gold leaf. He uses taro root instead of napa cabbage to keep the roll fresh and crisp. He makes a raspberry sauce using lobster stock and then pairs it with a glass of Dom Perignon.

We were also lucky to have the opportunity to sample some of the creations from other Taste Collections such as –
Lobster martini that Jack calls it “happy juice”
Lobster broth, lemongrass, vodka with a  salmon scallop lollipop 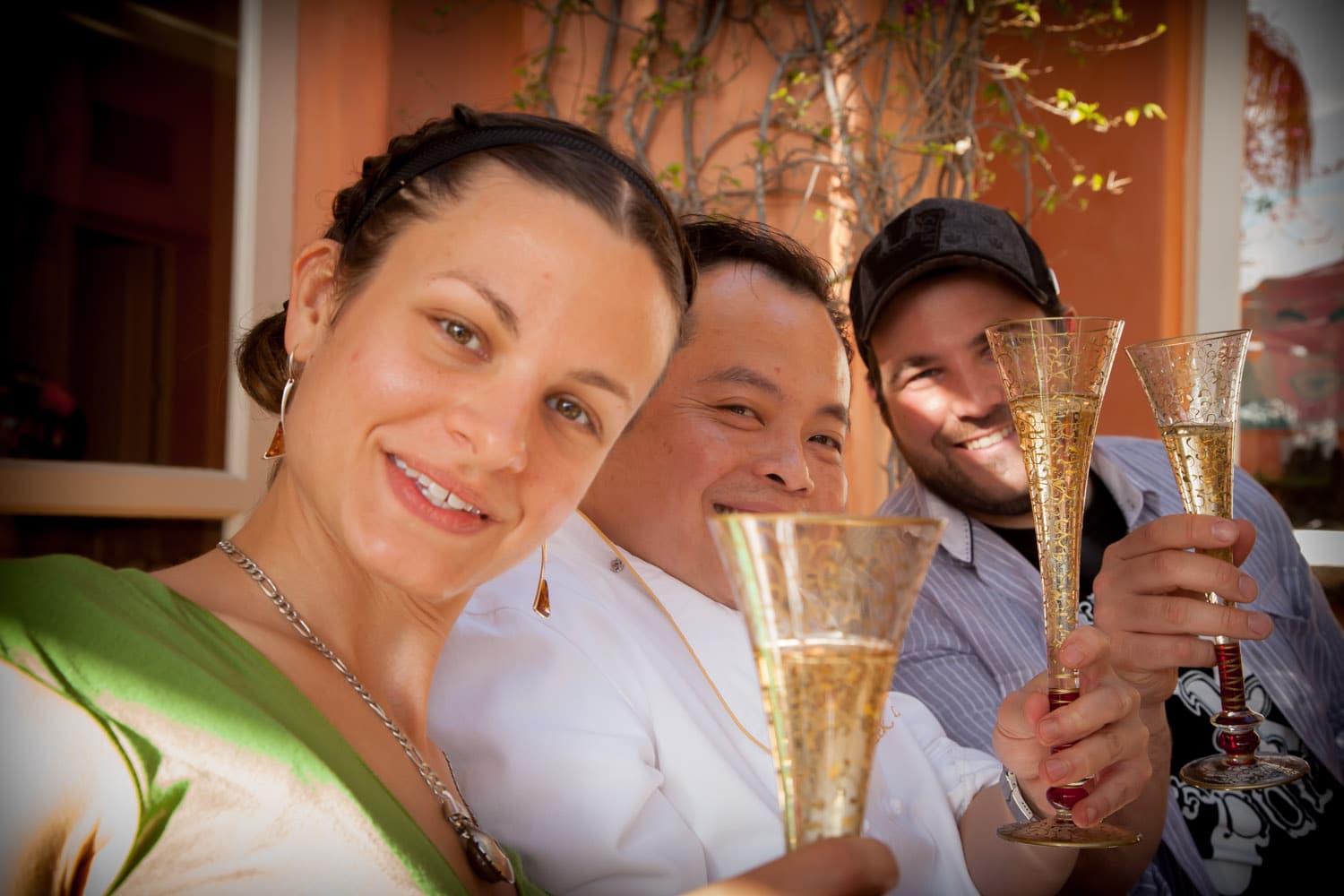 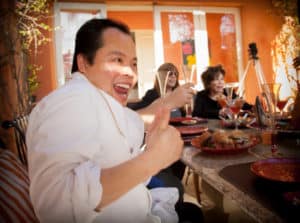 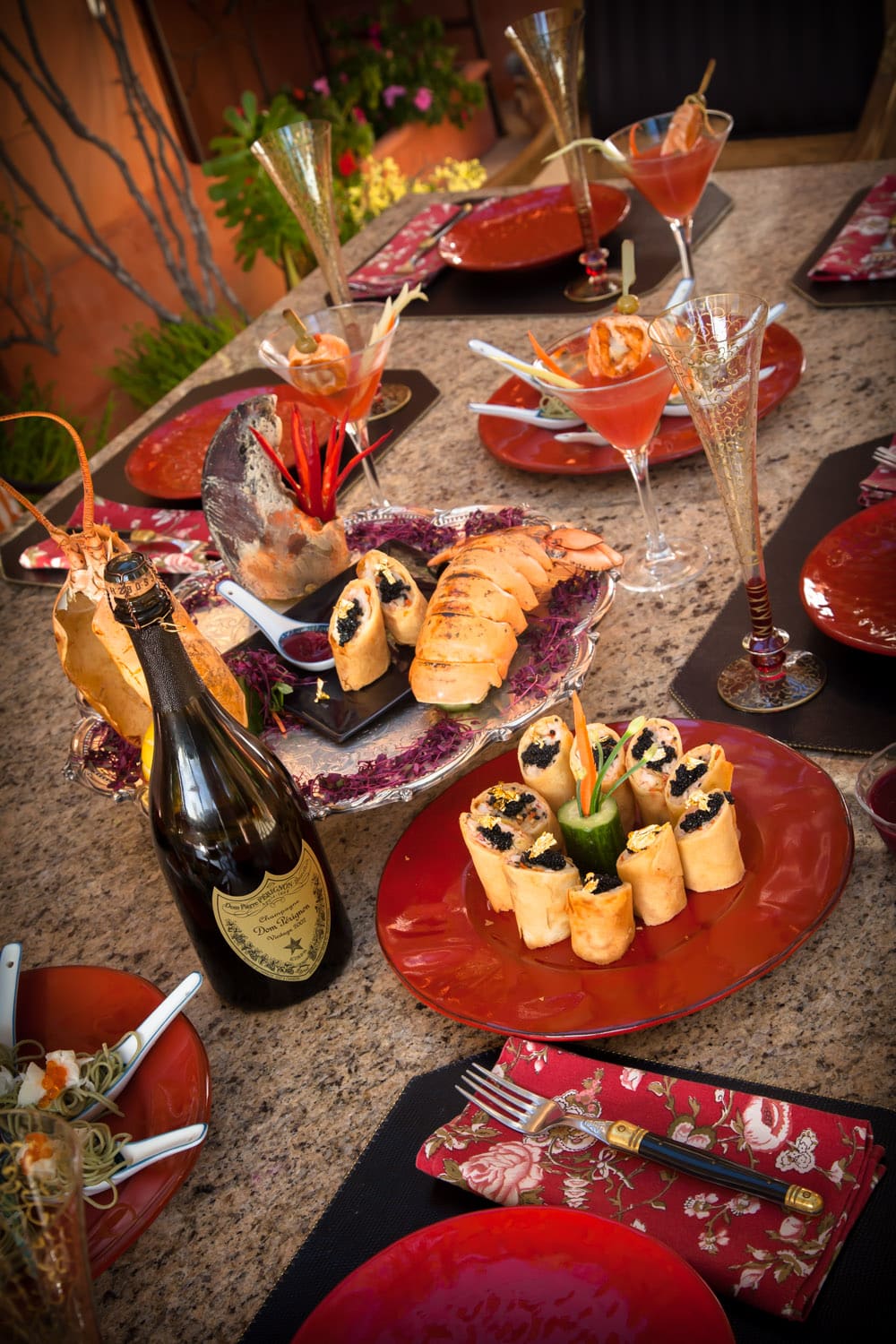 We are looking forward to his upcoming Taste Collections inspired by Sake, Tequilla and his travels around the world. Cheers to Chef Jack Lee for taking the time out of his busy Chinoise Catering schedule to show us all a “Taste of the Good-Life.”