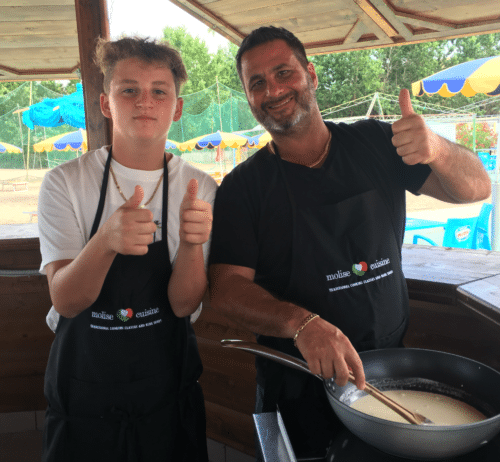 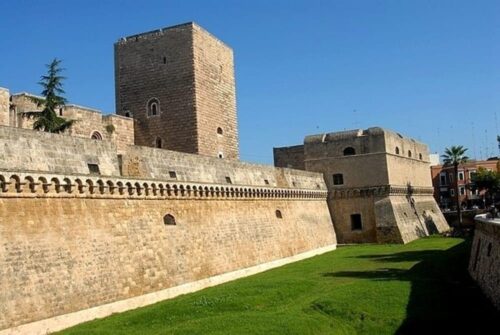 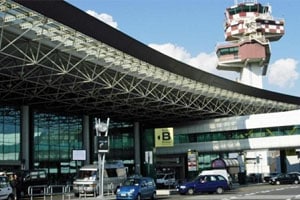 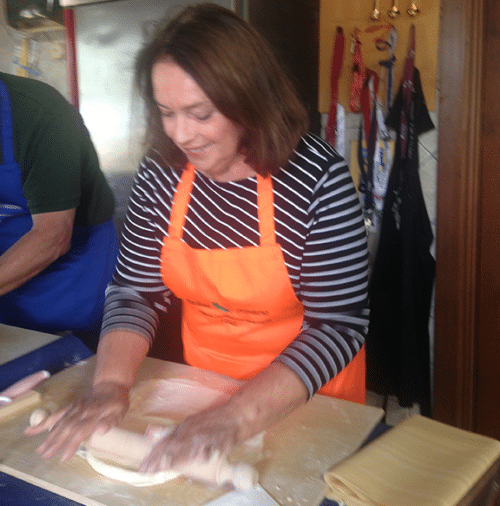 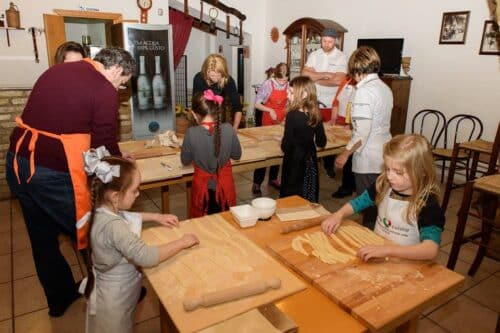 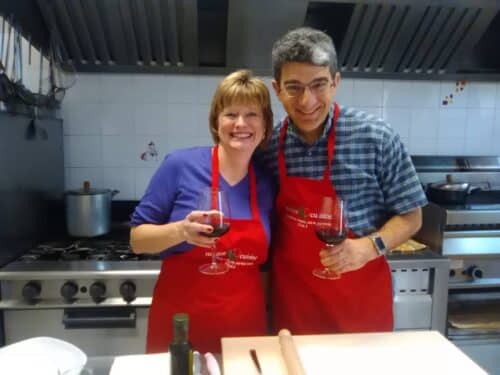 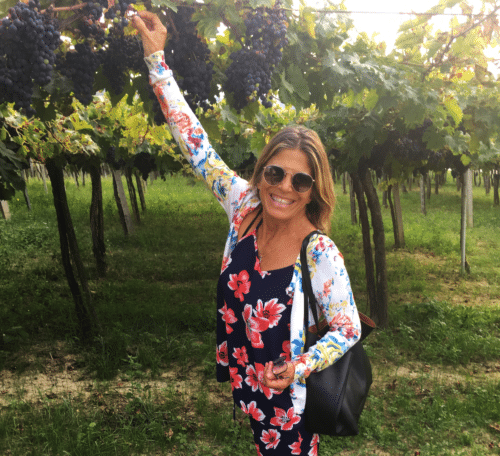 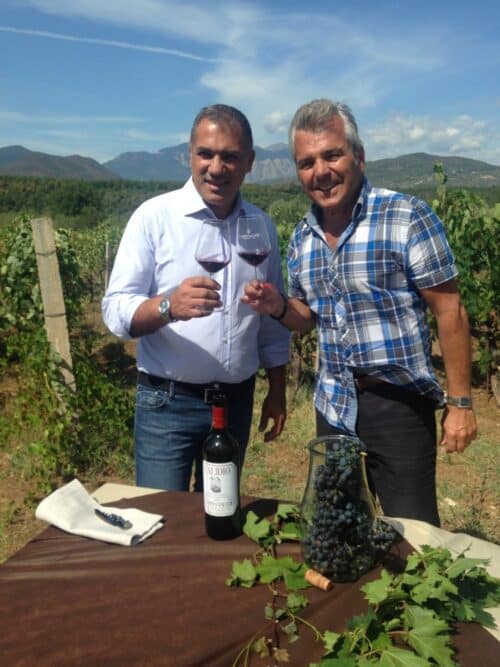 Our Cooking Courses are a hands-on experience. A mix of food, culture, and practical lessons. An experience allowing you to fully immersive yourself in the cuisine and culture of Molise. Learn to make dishes which you can easily reproduce at home. You will amaze yourselves and your friends by creating fresh pasta, traditional Central Italian dishes and of course pizza!!

The dishes are those of traditional Abruzzo / Molisane, such as Pallotte Cacio e Uova with Tomato Sauce, Cantucci Biscuits, Wine Biscotti and a Chocolate Wine Cake since this is a wine region. Wine for everyone!!

Molise produces 60% of all the truffles in Italy, therefore, we have of course added several truffles recipes for you to tackle.

Drive from the airport towards Molise and onwards to the small town of San Martino in Pensilis. You will be dropped at your accomodation, Hotel Santoianni, where you will be staying. After you are settled in your rooms there will be a short meeting for a briefing of the tour followed by a Welcome Dinner.

At 8:00 we’ll leave for Agnone, the center for important archaeological vestiges of the old Oscan-Samnite civilization. Agnone is sometimes called “the Athens of the Sannio” due to the large number of ancient ruins of the Samnitic culture. According to the tradition, the name of Agnone derives from the old city of Aquilonia that was destroyed by the Romans.

Agnone also lays claim to the most important ancient Molise document: the so-called “Oscan Tablet” (“Tabula Osca”), a bronze inscription written in the Oscan alphabet that dates from the 3rd century BC and now kept in the British Museum.

The first visit will be the Marinelli Bell Foundry. The Pontificia Fonderia Marinelli is an ancient factory for bells which has been operating in Agnone for nearly a millennium. It ranks as one of the oldest companies in the world, where the Marinelli family has run the foundry for the last 1000 years.

After the foundry we’ll visit the The “Francesco Gerbasi” Museum of Copper, one of the last places where you can learn about the ancient art of copper making.

The final visit of the day will be the Di Nucci Cheese Makers renown for their aged Caciocavallo di Agnone. The visit will include the chance to taste some of these beautiful cheeses for yourself.

Lunch will be at La Panonda where you be treated to some of the best cuisine the local area has to offer.

After a drive back the days Cooking Class will kick off at 5:30 followed by Dinner.

The day will start with a visit to Campobasso, the capital of Molise.

Campobasso is replete with monuments, including Castello Monforte, built around 1450 atop the ruins of a Norman construction, on a hill that dominates the city. The Cathedral was first built in 1504 but reconstructed in the neoclassical style in 1805 following its destruction in an earthquake.

Campobasso also boasts some of the most beautiful Romanesque Churches in the region including:

The city also houses the delightful Museo del Presepe, a museum displaying a fine collection of antique recreations of the Nativity scene, some dating from the 18th Century. Also included is the not to miss the Museo Sannitico.

Lunch will be at Monticelli Trattoria, a suggestive little place with homemade Campobassane specialties!!

The day will start with a visit the town of Acquaviva Collecroce. A municipality located in the woods, the village boasts a long history acting as a base for the Knights of Malta giving it an atmosphere of medieval chivalry. In addition, there are several delightful fountains as well as Latin palindromes written into the very stones of the village itself.

Besides the lush nature, we will walk in the old town to observe the historic architecture, such as the Parish Church, built in perfect baroque style.

Near to Aquaviva Collecroce is our first vineyard visit. A tour and tasting in the Cianfagna wine cellar. Cianfagna specialise in producing award winning wines using the regional Tintilia grape variety.

That evening we will return for the evening Cooking Class at 5:30 pm

In the early morning , we will take a short drive to a small family-run olive mill Parco dei Buoi in the village of Larino. Here the owner, Francesco Travaglini, will give us a private tour of their olive groves, followed by a tasting of his olive oil. As we are tasting, we will have wonderful finger foods to go with it. When tasting the oil you will be in good company, Francesco Travaglini’s oil was used for the last Gala President Obama had for his guests!! A real show of quality for Molise.

We will then drive back for our cooking class and lunch. After lunch and a short break we drive to Sepino, Altilia.

Sepino was captured by the Romans in 293 BC. , the city wall was erected by Tiberius before he became emperor. Within the city walls are the remains of a theatre and other buildings including temples of Jupiter and Apollo. The presence of tombs from the 4th century, suggests that the city had been abandoned by that time.

Supper will be in Sepino, Altilia surrounded by all this history.

Drive to Larino, a city of approximately 8,100 inhabitants. The city of Larino has been continuously inhabited for millennia. Originally settled by the Samnite and Frentani tribes of Southern Italy, the city came under the control of the Oscan civilization. In 217 BC, the Romans defeated Hannibal here, and it was later incorporated into the Roman Empire.

We will visit the Roman Amphitheater with a dedicated guide. The elliptical amphitheater was built in the 1st century AD by a prominent citizen of Larino who had made his fortune in far away Rome. The arena could comfortably seat 12,000 spectators.

After, we’ll head over to Palazzo Zappone which was probably originally built as a Norman castle. The palace is now repainted as it would have looked decades ago. The structure has three distinct facades. One distinctly shows the physical structure of the original castle. The second has a renaissance feel and housed the rulers of the town. The third is a large brick neoclassical structure which was adjoined to the castle in the 19th century.

The day will also include a visit to the Civic Museum and Larino’s Cathedral, which is considered to be one of the finest in Italy, followed by a stroll through Borgo Vecchio, the old town.

Then there is free time for shopping, sightseeing and the obligatory Italian Gelato.

That evening will be our final Cooking Class followed by the presentation of your own recipe books.

The final day we will provide a transfer back to the airport.

A deposit of 250 euros per person is required to register for a tour. We accept cash, bank wires, and VISA/Mastercard. The balance is due no later than 60 days before the tour begins. Upon receiving your deposit, Molise Cuisine will send you a confirmation.

If not paid on time, Molise Cuisine reserves the right to treat the reservation as cancelled. The expenses covered in the prices quoted are hotel room (double occupancy, no supplement fee for a single occupant), cooking classes, all meals, transportation for private excursions as agreed in the course program, and scheduled transportation to and from an Italian airport (Rome, Naples, Pescara or Bari). Airfare is not included.

Less than 60 days before the course begins: 100% of monies sent, unless you send a replacement participant, in which case the fee will be 250 euros of monies sent.

Tour participants expressly agree that Molise Cuisine shall not be liable for any delay, mishap, inconvenience, expense, bodily injury or death or damage to participant and/or property occasioned through the acts, negligence or defaults of any company or individual engaged in providing the services arranged by Molise Cuisine. Molise Cuisine shall not be liable, directly or indirectly, for any injury, death, or damage for any reason whatsoever, including but not limited to acts of God, detention, war, quarantine, weather, terrorism, civil disturbance, strike, changes in government regulations, airline or other travel operations, or other causes. Molise Cuisine reserves the right to accept or retain any person as a participant in the course and to make itinerary changes whenever, in its sole judgment, conditions warrant. If a participant is required to leave by Molise Cuisine after classes have begun and before they have ended, then the return of 10 percent of monies paid by the participant to Molise Cuisine shall release Molise Cuisine from any liability to the participant. Molise Cuisine will not be liable for any belongings damaged, lost or left behind by the participant. By means of registration, agreement is made to all the terms and conditions as stated herewith. Purchase of insurance for lost luggage, personal effects, accidents, health and trip cancellation is recommended. Consult your travel agent. Consult your tax advisor as to whether these courses are tax-deductible to you. 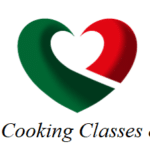